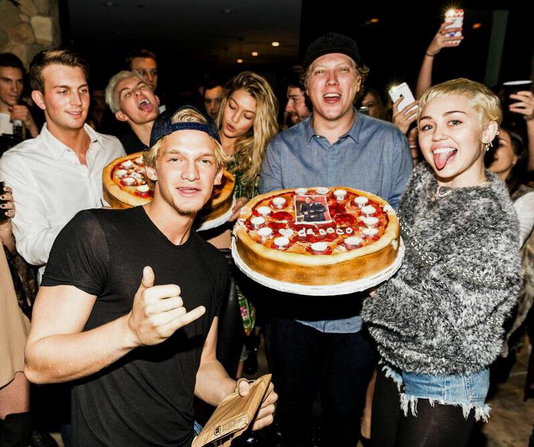 Surrounded by close friends on Sunday, the Australian singer was joined by the likes of girlfriend Gigi Hadid and US musician Miley Cyrus for the celebrations in Los Angeles.

Taking to Twitter on Monday, the blonde heart throb shared a photo of his big night, along with the caption: ‘Thank you to everyone who helped me celebrate my 18th last night, grateful for such great mates’. The black and white image showed the teen sensation surprised with not one, but two delicious birthday cakes and his close pals on hand to cheer him on.

Wearing a dark T-shirt, the singer had his head down as he seemingly composed himself after the pleasant surprise, with Gigi and Miley seen in the crowd. On Monday 20-year-old Gigi shared an Instagram picture along with a very sweet message to Cody for his big day.

The romantic filtered photo showed the couple embracing in shallow waters at the beach with the sun going down behind them and the pair surrounded only by endless blue oceans.

She nestled her head into her musician partner’s shoulder as he cuddled her shirtless, only wearing black and white striped board shorts and a dark coloured cap. Famous friends: Another famous face to wish Cody a happy birthday was singer and actress Selena Gomez who shared this fun snap and a cute message for the Surfboard singer ‘Happy birthday to you my bub…you are an unmatched soul in this world and love in my heart x’ she penned the loving message.

Another famous face to wish Cody a happy birthday was singer and actress Selena Gomez.

The 22-year-old who recently partied with Cody and Gigi in Abu Dhabi posted an Instagram photo of herself with the Surfboard singer and wrote: ‘Happiest of birthdays to bubba and such an incredible person. Love you inside out @codysimpson -here’s to more’. The Australian singer was nominated and won the International Male Artist award at the event.

He then had to make a quick flight back to America to headline the Bravefest concert in California on Saturday.

It’s set to be a big year for Cody who will make his acting debut as a guest star on US TV sitcom Cougar Town.