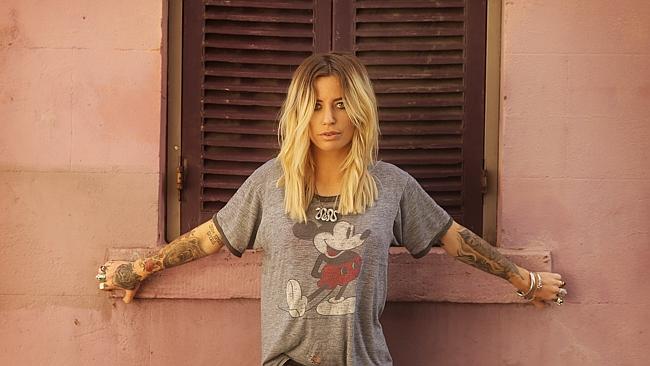 IT is a voice you have heard regularly on the small screen and now acclaimed Kiwi artist Gin Wigmore is heading back to the radio after a four year break with long-awaited single New Rush.

Wigmore’s smoky blues growl has distinctively soundtracked long-running commercial campaigns for Johnny Walker and Alfa Romeo with her song Kill Of The Night and her songs have also featured on a raft of popular television dramas including Grey’s Anatomy and The Good Wife.

Most notably her song Man Like That scored her a close encounter with Daniel Craig when it was used for a Skyfall tie-in with Heineken.

The commercials and syncs helped pay the rent for the now Los Angeles-based singer and songwriter between her second album Gravel and Wine and the upcoming Blood and Bone, released on June 26.

“I want my music to be heard; I want my voice to be known. There is definitely a disconnect between the music and who is she and I kind of like that anonymity even though my music has made its way into the world,” she said during a whirlwind visit to Sydney last week.

“The stigma about music and commercials is gone. We are at a point that everyone knows it is hard trying to make money in this day and age, so musicians aren’t ridiculed for doing things like this.

“There’s classy ways to it. And you get to meet Daniel Craig. He’s amazing, he’s the coolest and I got to borrow his cashmere coat. I don’t think he knew I borrowed it but I was cold.”

The first single New Rush announces a bold new direction for the blues rock artist who landed on the critics’ radar with her debut record Holy Smoke, which was recorded with Ryan Adams’ band The Cardinals in 2009.

She ironically found inspiration to work with beats and shift away from more acoustic fare when on the punk-dominated Warped tour throughout America in 2013.

“I thought I would totally be a fish out of water on that tour but I ended up feeling quite in alignment with that culture,” she said.

“I didn’t know the punk world was so disciplined and political and confident and righteous. I had a blast.

“Surviving that two month road-dogging tour gave me this real confidence to push the boat out on this record and make life hard for myself musically.”

Wigmore also celebrated another new phase of her life, marrying Jason Butler, frontman for American punk band Letlive in a spontaneous ceremony in Hawaii last September, the day after he proposed.

He joked that since she had “run out of your first fiance” he wasn’t giving her any time to change her mind.

So barefooted in a little black dress, she married Butler and said she could not be happier being his wife.

“When you know, you know. I could have got married to him the next day after I met him,” she gushed.

No doubt he was the New Rush she was looking for when she wrote her new single.

Wigmore will head back to Australia for album launch gigs at the Newtown Social club in Sydney on July 8 and Gasometer, Melbourne on July 9.