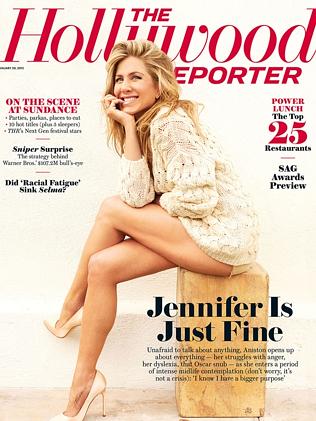 JENNIFER Aniston has opened up in a candid interview about her struggles with anger, dyslexia and people’s constant obsession over her desire to have a child.

In an interview with The Hollywood Reporter, Aniston said a chance discovery that she had the learning condition in her early 20s made everything make sense.

“I thought I wasn’t smart. I just couldn’t retain anything,” she told the mag.

“Now I had this great discovery. I felt like all of my childhood trauma-dies, tragedies, dramas were explained.”

She said the condition had impacted her education and self-esteem during her childhood, but the revelation was life-changing. Aniston says she is a bit of a “control freak”.
Source: Getty Images

“The only reason I knew (that I had dyslexia) was because I went to get a prescription for glasses.

“I had to wear these Buddy Holly glasses. One had a blue lens and one had a red lens. And I had to read a paragraph, and they gave me a quiz, gave me 10 questions based on what I’d just read, and I think I got three right.

“Then they put a computer on my eyes, showing where my eyes went when I read. My eyes would jump four words and go back two words, and I also had a little bit of a lazy eye, like a crossed eye, which they always have to correct in photos.”

Aniston also confessed she is a “control freak” who is only now learning to deal with her anger.

“I always thought, if you’re angry you just don’t say anything,” she says. “I would come out passive, things would come out passively. But it doesn’t have to be black or white. You don’t have to be a hysterical human being and have veins popping out of your neck and turn bright red and terrify people — or else keep quiet and put your head in the sand. I used to loathe confrontation. Loathe it. It was absolute. I understood anger, but I didn’t know that you should express it. Which has been something that I’ve really tried to work on.”

She’s also tried to master her need for order. “I’m a control freak,” she admits. “I like to be in charge of everything. My life was so out of control growing up, it’s very important today for it to be in control.” Even now, she says.”

And as for babies?

“Listen, that’s a topic that’s so exhausted. I get nervous around that, just because it’s very personal.

“Who knows if it’s going to happen? It’s been a want. We’re doing our best.”