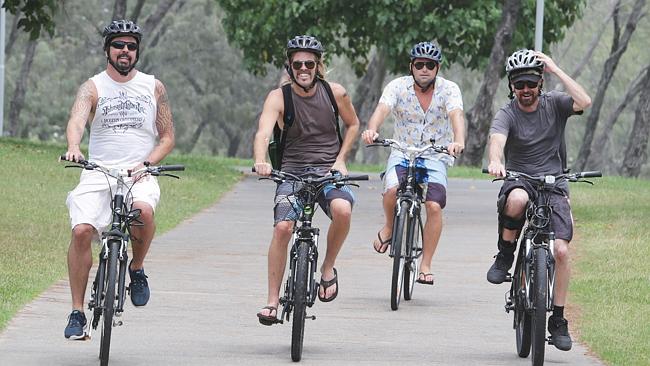 A CELEBRITY cameo, old favourites, classic covers … and a story about spending the night in a Gold Coast slammer. Last night’s Foo Fighters gig had it all.

Tens of thousands of fans turned out at Suncorp Stadium, with the rock royalty not disappointing.

Former Nirvana drummer and now Foo Fighters frontman Dave Grohl revved up the crowd with stories including one about spending a night in a Gold Coast jail, after being caught drink-driving on a rented moped scooter post Big Day Out gig.

“They threw my arse in jail,” he said before dedicating a soulful Big Me to the Coast’s boys in blue to return the favour.

It seems Queensland fans weren’t the only ones enjoying the Foos.

Gold Coast crew The Mad Hueys posted a pic on Instagram of the boys with Pirates of the Caribbean star Johnny Depp. And it seems the serial pranksters weren’t joking this time, with others tweeting they spotted the Hollywood star backstage.

Depp is currently filming the latest Pirates movie on the Gold Coast.

Back on stage, Grohl made it a night to remember for one fan in particular.

The Foo’s begrudgingly covered Tom Sawyer, by Rush, for “Ethan the kid with the braces and the sign he made on his computer” in the front row, before Grohl admitted “nobody likes that f***ing song”.

DID YOU GO TO THE FOO FIGHTERS’ GIG? Give us your review below

It was the only lull in an otherwise stellar performance for the Foo Fighters, who celebrated the 20th anniversary of their first ever gig with a cracking performance last night, and charismatic frontman Grohl proving why he’s considered one of the best in the business.

Brisbane was the first Australian city to get a taste of the Foo’s Sonic Highways tour, with the eleven-time Grammy award winning band back Down Under for the first time in four years.

After opening with recent hit Something From Nowhere, it was the super high energy extended version of The Pretender that got the crowd really fired up, with Grohl pausing halfway to promise fans a long night, and to play till “they f***ing kick us off the stage”. Foo Fighters at Suncorp Stadium. Feb 24, 2015.
(Photo by Chris Hyde/Getty Images)
Grohl made good use of the runaway extending down one third of the stadium, giving excited punters plenty of face time, but was almost upstaged by animated drummer Taylor Hawkins, who took over the microphone to cover Stay with Me, by The Faces, and performed a killer drum solo to close Monkey Wrench.

Halfway through the concert, the band moved to a rotating stage halfway down the runway, launching into a cover of ACDC’s Let There Be Rock.

The crowd was less enthused by the Foo’s take on Tom Sawyer, but was won back by an infectious rendition of Under Pressure by Queen and David Bowie, eating out of the Foo’s hands up until the closing number, Everlong.

Brisbane is the first stop of the band’s six-city tour Down Under, supported by local band The Delta Riggs, and Chicago band Rise Against. The group last toured here in 2011 with Tenacious D.

The tour may be named for Sonic Highways, their eighth and latest studio album, but the two and half-hour long concert includes plenty of favourites from their two-decade long back catalogue, dedicating Breakout to their “all the old Foo Fighter fans”.

The band has been making the most of its time in the Sunshine State; frontman Dave Grohl and drummer Taylor Hawkins were spotted cycling around Surfers Paradise and grabbing coffee in Broadbeach on Tuesday, with some cheeky fans stalking them out to offer up cans of XXXX Gold.

Hawkins was also spotted cosying up to fans at Shooters nightclub. Grohl told an national radio show this week that he planned to sample plenty of local seafood during his stay here.

He also loves a good, old Aussie meat pie. “Those bugs in the ocean — Moreton Bay bugs — I love those things,” he said..