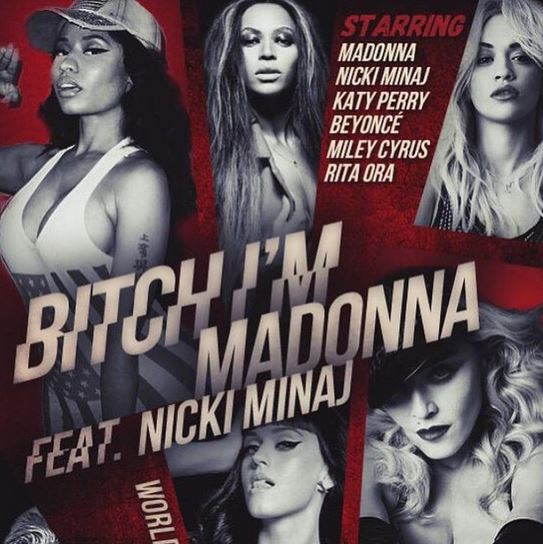 From the looks of her latest music video, it seems as though the Queen of Pop still knows how to party with the best of them . Yesterday, the singer released the treatment for her latest single, “Bitch I’m Madonna”, a boastful party anthem, and she’s called on some of her most famous friends and collaborators to join in.

The colorful, raunchy clip features plenty of recognizable faces, though not many actually appear to be on the hotel set. Beyoncé, Katy Perry, Miley Cyrus, Kanye West, and Nicki Minaj (who has a rap verse on the track) all make very short cameo appearances, which were all recorded somewhere else and inserted while editing. The stars joining Madonna aren’t really in on the party, but it’s nice to see them anyways. Some celebs—Rita Ora, Chris Rock, as well as Diplo (the song’s producer) and designer Alexander Wang—did make it to the filming, and they look like they’re partying pretty hard.

Though the two don’t look alike in style and have nothing in common when it comes to storyline, it’s hard not to make comparisons to Taylor Swift’s “Bad Blood” video, which was released just a few weeks ago and used a similar tactic to convince people to tune in. Both singers recruited a slew of celebrities to guest star, though in Taylor’s clip, all the models, singers, and actors had characters, whereas in Madonna’s, the well-known figures mostly just pop in and out quickly. Even the image that Madge shared on Instagram to tease the video looks like it could have belonged to Taylor Swift and her “Bad Blood” crew.

Who can blame Madonna for trying to borrow a page out of Taylor’s playbook, if that’s the case? “Bad Blood” was a surprise number one, and Madge’s album hasn’t had any real hits yet. Celebrity support can really bolster a video, and therefore a song’s chart position…if done well. Whether the video for “Bitch” is “well done” is up for every viewer to determine for themselves.
The video premiered exclusively on Tidal yesterday (though is now available on YouTube), and is just the latest highly sought-after piece of content that the service has managed to get an exclusive for. The company is differentiating themselves from other streaming services with the promise of higher quality audio than competitors, as well as access to new songs, videos, and other content from big stars such as Madonna. The singer is one of seventeen celebrity co-owners, many of whom have already contributed something of value to the company that wasn’t available anywhere else at first.

The treatment was directed by Jonas Akerlund, who has worked with Madonna many times before. In fact, the two actually share two Grammys—one for Madonna’s well-known “Ray of Light” clip, and the other for Best Long Form Music Video for directing the singer’s Confessions Tour.

“Bitch I’m Madonna” is the third single from the singer’s thirteenth album, Rebel Heart, and both have made it to number one on the dance charts. Recently, when “Ghosttown” hit the summit, Madonna became the singer with the most number ones on any one chart of all time. With a fanbase as rabid and club-loving as hers, it’s likely that “Bitch” will also find itself towards the top, furthering her record.