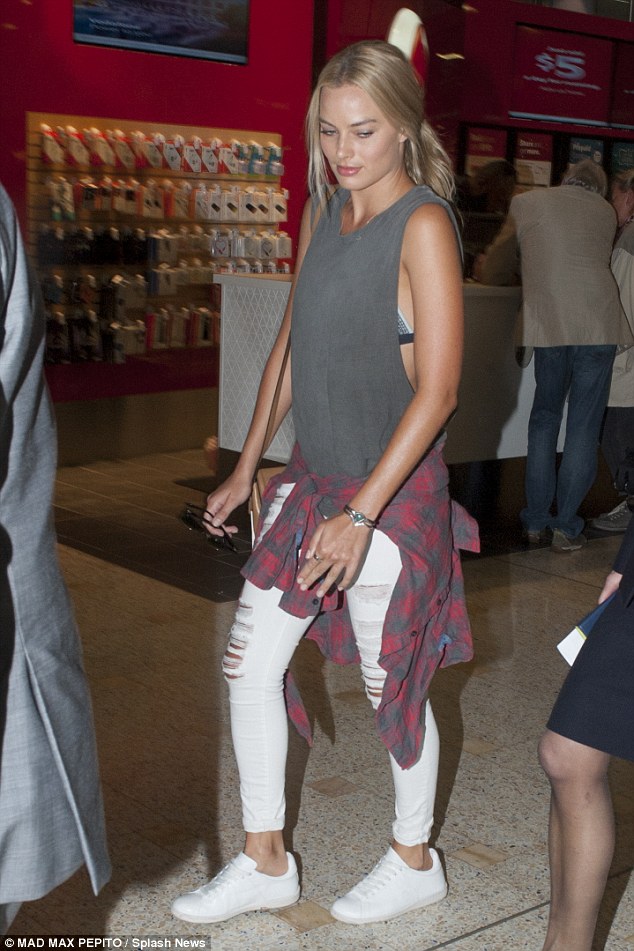 She had just flown over 25 hours from the UK to Australia.

But Margot Robbie looked as fresh as a daisy as she touched down in Sydney on Wednesday morning.

The stunning Suicide Squad star tied her hair back in a ponytail to show off her flawless complexion.

The 25-year-old actress also revealed a little more than fans bargained for, flashing her bra underneath a loose-fitting tank top paired with white ripped jeans.

The former Neighbours actress teamed up her laid back attire with a pair of white sneakers.

She accessoried her attire with multiple silver sings and bracelets as well as a tanned bag which she crossed over her slender figure.

Despite looking well-rested, Margot has had a very busy few days.

Earlier in the week she attended an exclusive British Airways bash at a luxury villa on Zaya Nuraj Island in Abu Dhabi with fellow actor Orlando Bloom and singer Jessie J, before jetting back to London, and now onto Australia.

At the Middle Eastern bash she revealed that she now has her sights set on becoming a producer as well as an actress.

The Wolf Of Wall Street star said she has been working on a number of projects behind the camera, including a Pulp Fiction-style film.

‘Something new is that I’ve got into producing lately. I’m producing a couple of things but there is one big one in particular that I’m focusing on,’ she told The National.

‘I’ll be aiming to shoot it in London in the new year and I’m really enjoying being behind the lens.

‘The experience has really opened my eyes to the world of indie film producing — it’s such a hustle, extremely difficult but very rewarding,’ she continued.

Margot added she was aiming to shoot the film titled Terminal in London next year.

When asked what the film would be about, Robbie described it as a ‘thriller-noir’ flick, comparing it to a ‘British version of Pulp Fiction and Sin City.’

Despite her acting career set to sky rocket with next year’s release of comic book film Suicide Squad, Margot admitted that Terminal was where her focus is right now.