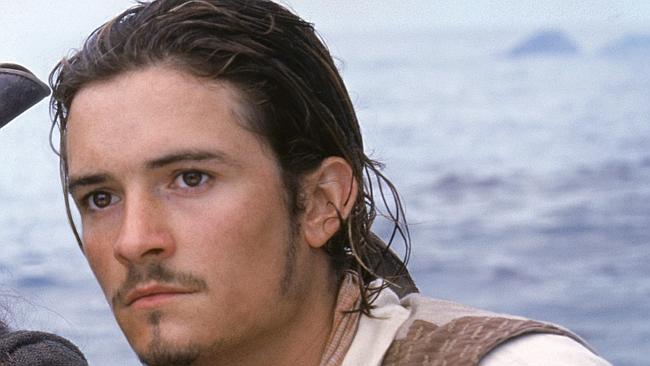 IT’S bye Johnny and hello Orlando Bloom as a new Hollywood heavyweight steps into the spotlight on the set of Pirates of the Caribbean: Dead Men Tell No Tales on the Gold Coast.

The scene, expected to be filmed at night, will see The Flying Dutchman — a ghost ship that made its first appearance in Dead Man’s Chest under the command of the fictional captain Davy Jones — rear up and rise from the sea.

A legendary vessel that can never make port, The Flying Dutchman is doomed to sail the oceans forever. It was last captained by Bloom’s character, Will Turner, at the end of the last Pirates film, At World’s End.

“He was THE cutest ever kissing and cuddling him, telling him how much he missed him,” she wrote.

The order for Bloom is tagged: “Just another name. All the Hollywood A list here. Keeping the talent warm.”

Fishermen and divers at the Gold Coast Seaway yesterday afternoon could have been forgiven for thinking they’d just seen The Black Pearl return from a day’s filming on the high seas.

However the ghostly looking single-mast ship, which returned to port about 1.30pm was no match for Captain Jack Sparrow’s infamous 32-cannon, 165ft East Indiaman galleon.

Instead, it was the former Bundaberg-berthed replica of a 1897 Scottish trawler once known as The Rainbow Gypsy, now sailing the seas in Pirates of the Caribbean: Dead Men Tell No Tales as The Dying Gull.

Nicknamed “The Bondi Cigar” by Pirates 5 crew, The Dying Gull is the sinking ship from which Johnny Depp’s character Captain Jack Sparrow emerged at the start of the first movie in the series, The Curse of the Black Pearl.

The Rainbow Gypsy’s transformation into the ghostly hulk is testament to the skills of local construction crews, whose craftsmanship has been roundly praised by all involved on the massive Pirates 5 shoot. Director Joachim Ronning’s daughters join him on the Pirates of the Caribbean set. Picture from Instagram.

Other scenes have been filmed on ships’ decks recreated indoors at Village Roadshow Studios.

Up to 12 different ships will be used in the latest instalment of the franchise.

The Dying Gull is expected to feature in scenes to be filmed at a new outdoor set at Doug Jennings Park.

Lady Gaga Credits Bradley Cooper in a Star is Born