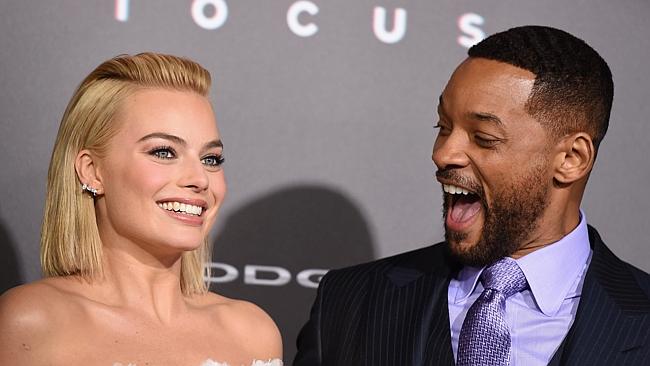 AUSSIE rising star Margot Robbie has revealed she did something at the Oscars on Sunday that had screen legend Clint Eastwood shooting her daggers.

The glamorous actress told Shazam Top 20 radio hosts Angus O’Loughlin and Ash London that she smuggled a bottle of champagne back to her seat.

The Academy Awards is notoriously a dry event, with the star-studded crowd confined to theatre seating during official proceedings. “I went backstage because I had to present (on stage) and afterwards I did an interview… they gave me this bottle of champagne,” Robbie said.

“I was back in my seat and we were in an ad break, so I opened it. It popped really loudly. Clint Eastwood was sitting right in front of me and he turned around and glared at me.”

“I kind of ducked my head.” Although she admits Eastwood’s angry face looked a lot like the furrowed expression the iconic actor normally sports.

“I don’t know. Maybe he wanted some? It looked like a glare though.” It’s not the only awkward encounter with another celeb that she has experienced of late.

Robbie’s next movie project Focus, in which she stars alongside Will Smith, is released in Australia on March 5.

While she was chuffed to land a gig alongside the rapper-turned-actor, Robbie admitted she had never seen his most iconic work — hit 90s TV series The Fresh Prince of Bel Air.

Hell no! … Margot admits she has never seen an episode of Fresh Prince of Bel Air, which her co-star Will Smith starred in. Picture: Getty Images Source: Getty Images

When asked to compare kissing Smith to kissing her last co-star Leonardo DiCaprio, Robbie admitted it was hard to judge.

NEXT GIG: Margot Robbie’s sexy new role in Focus, opposite Will Smith

“Screen kissing isn’t quite the same as a normal, real-life kiss. I’d say they’re definitely on par. They’ve had a lot of experience.” But Australian actor Alan Fletcher, who plays Dr Karl Kennedy on Neighbours, is by far the best smoocher, Robbie joked.