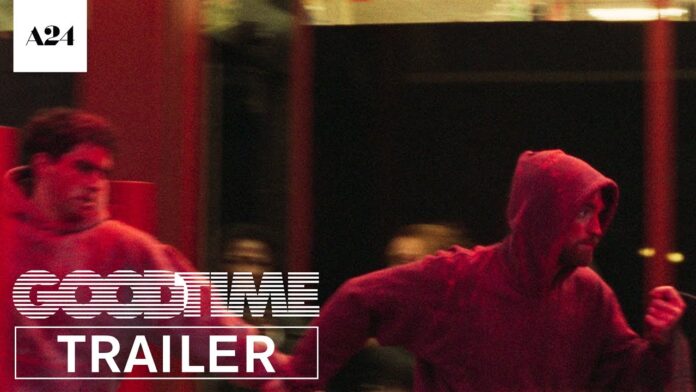 After a botched bank robbery lands his younger brother in prison, Connie Nikas embarks on a twisted odyssey through New York City’s underworld to get his brother Nick out of jail.

Good Time is a small movie about small people doing small things. But never let it be said that it’s dreary or dull. This movie somehow took the edgy anxiety of a waking nightmare, bottled it up, and put it on the screen so you’d leave the theatre in a cold sweat. If the DVD/Blu-ray release of Good Time doesn’t have a critic blurb saying “this movie gave me indigestion,” I’ll be sorely disappointed.

The setup is simple: a wanted man (Pattinson) tries to raise the money for bail to get his mentally handicapped brother (Safdie) out of prison. The two had held up a bank earlier that day and throughout the night, Connie resorts to dubious and dangerous lengths to avoid punishment and consequence.

In an interview with NPR co-director and co-star, Benny Safdie said “We wanted to deliver a piece of pulp that actually felt dangerous.” With that in mind cinematographer, Sean Price Williams shot on 35mm and much of the movie is loaded with claustrophobic close-ups and delirious hand-held sweeps. The 35mm film bleeds into the New York nocturne. The punishing fluorescents and neon glints that make up the movie’s milieu taunts our protagonist as he spins his wheels round and round. It’s a movie that recaptures the intimacy and intensity of a 4am sneak-about.

Even in calmer moments, the film pulses in its nervy desperation. The various innocents the come across Connie’s path are more-or-less looking for the same thing, a way out of the mess. They approach their situations with variant levels of legality but never with Pattinson’s level of sleaze or sense of entitlement. Despite this, Connie proves remarkably resourceful; one minute his back is up against a corner, the next he’s clawed his way out and slumping towards the next hurdle of his odyssey. One can’t help but think that if Connie put his mind towards anything other than crime, he’d be on the cover of a business magazine.

Instead, he’s in an unending fever dream whereby the urban sprawl is the water to his drowning rat. At its height, Good Time has the sparseness and clarity of a John Steinbeck novel and at its most pedestrian, it still has the chaotic energy of The 25th Hour (2002).

Meryl Streep stars in Ricki And The Flash