News radio journalist Frank Bonneville (Eric Bana) enters a murder scene posing as a cop. After getting the details of the crime, he is removed from the premises and, immediately after, reports the story live on the radio. When he returns to the station, Frank is applauded by colleagues on getting the story before any other press, but his boss Geoffrey Mallard (Kevin Pollak) warns that if he breaks the law one more time, he’ll be fired.

That night, Frank’s sound technician Ian Finch (Ricky Gervais) takes his wife Eleanor (Vera Farmiga) to the station’s annual ball, but has to leave for a stake-out with co-worker Claire Maddox (Kelly Macdonald). Eleanor then meets Frank, who sleeps with her, unaware she is married to Finch. The following day, Mallard puts Frank on a story about an uprising in Ecuador, and assigns Finch to accompany him. However, Finch tells Frank he can’t go as Eleanor has left him. He also says he’s written a letter, begging her not to end their marriage. 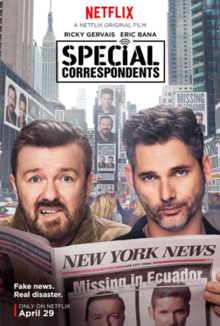 Finch later changes his mind about Ecuador, and he and Frank pack for their trip. At the airport, the two realize Finch has accidentally thrown their passports and plane tickets in a garbage truck. Frank and Finch return to the city and hide out at a café owned by Spanish couple Brigida and Domingo (America Ferrera and Raúl Castillo), located across the street from the radio station. With Brigida and Domingo’s help, Frank and Finch fake their war reports in the couple’s spare room.

After Finch and Frank decide they need to cover a bigger story, they invent a man named Emilio Santiago Alvarez, whom they claim is elusive and closely linked to the war. This report alerts the U.S. government, who now believe that Frank and Finch are targets for Alvarez’s men. Meanwhile, Frank and Finch watch as other media outlets report on Alvarez, including their TV rival John Baker (Benjamin Bratt). Mallard calls Frank, asking for the two men to go to the U.S. embassy in Quito, where they will then be flown home. Panicking that they’ll be found out, Frank and Finch destroy their SIM cards so they cannot be traced.

The next morning, Frank fails to check in with Mallard, worrying the station. The media begins reporting about Finch and Frank’s disappearance. Claire visits Eleanor to offer her sympathy, but Eleanor seems more interested in getting her story out. Frank and Finch stage a hostage situation, and send out a message to the President, asking for a ransom or they will be executed. Later, Frank and Finch watch as Eleanor appears on TV. This prompts Frank to find out about her identity as Finch’s wife. She then performs a song, “Dollar for a Hero”, appealing for their safe return.

Eleanor subsequently becomes a national sensation and sets up a charity for Finch and Frank. Mallard asks Claire to get to know Eleanor, who is using her husband’s plight so she can start a singing career. Finch realizes Eleanor’s selfishness in the situation and says he’s no longer upset that she left him. On Finch’s birthday, he admits he can’t keep up the charade any longer. Finch and Frank stop off at his apartment to take some of the donated money, but Eleanor catches them. The three decide to split the cash so they can all get what they want. Frank and Finch drive cross-country and sail illegally to Ecuador. They hitch a ride to Quito from a local, but first stop off at a rundown bar. There, they are held at gunpoint and taken to a small village, where they are locked up. Thinking they’re going to die, Frank admits to Finch that he slept with Eleanor.

The next morning, the captors demand ransom from Eleanor but she refuses and tells them to kill Frank and Finch. When a captor returns, planning for them to fight to the death, Frank steals his gun and Finch ends up shooting him. They escape by stealing a car, make it to the U.S. embassy, and are flown home on a private jet. On returning home, they are greeted by the Secretary of State, press, friends and family. Frank makes a speech, and Finch bypasses Eleanor to greet Domingo and Brigida. Eleanor then speaks to press about her upcoming album, while Finch takes off his wedding ring. He approaches Claire, whom he realizes likes him for who he is. The pair then walk off towards the city.

Brenton Thwaites in Pirates of the Caribbean 5