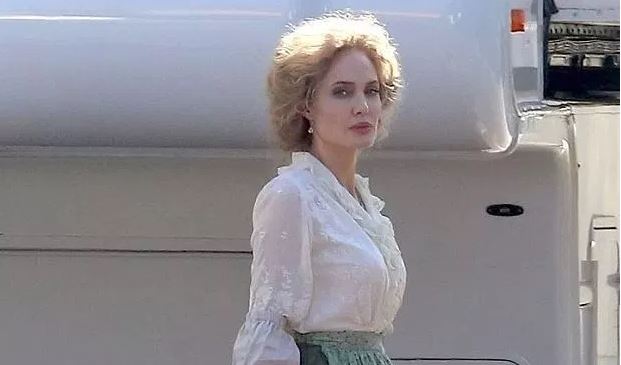 Angelina Jolie is pictured for the first time filming her new fantasy drama Come Away.

Despite her ongoing divorce negotiations with Brad Pitt, it was back to work for the 43-year-old as she got into character wearing a period costume on set in Hollywood on Monday.

Angelina stars alongside David Oyelowo in the fantasy adventure movie which is a prequel to Alice In Wonderland and Peter Pan.

The movie imagines Peter and Alice as siblings before they went to Wonderland and Neverland. When their eldest brother dies in a tragic accident, they each try to save their parents, played by Jolie and Oyelowo, from their downward spirals of despair until finally they are forced to choose between home and imagination.

The actress was spotted on the set of her new movie ‘Come Away’ wearing a blonde wig.

Sharing snaps to Instagram from set earlier this month Oyelowo posed next to co-star Michael Caine, whose role in the movie has not yet been revealed.

‘Walking with giants. Sir Michael Caine came to play on COME AWAY. #legend’ the 42-year-old British star wrote next to the selfie.