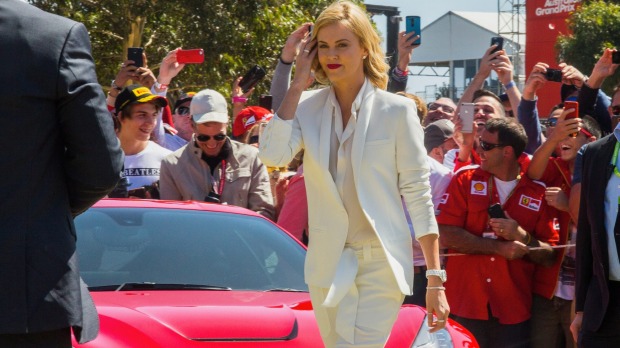 Despite being an Oscar winner,  Charlize Theron still managed to fluff her lines, then cancelled all interviews on a day which did not go entirely to script.

Luckily, the event’s other big name, Arnold Schwarzenegger, had no problems ­remembering his lines, promising: “I’ll be back.”

Theron, in Melbourne without partner Sean Penn, was making a paid appearance for a $500 million South Yarra ­development for which she is the face. But at a media call, she accidentally dubbed the development Capitol Hill rather than Capitol Grand.

Capitol Hill is another name given to the United States Congress and is also a residential area in Washington DC.

“So I’m really happy because I love Australia and I haven’t had the opportunity to spend a lot of time in Melbourne,” Theron said.

“So having this invitation to come out to this extraordinary event and asked to be joining this incredible family that you’ve created with Capitol Hill, oh Capitol Grand.” Charlize Theron cancelled all scheduled interviews after her media call.

Soon after, Theron was chauffeured to the grid where she signed autographs for fans. She was touched by the “warm welcome”, but didn’t know much about Formula One.

“I don’t know enough of the sport to be able to say anything, I’ll just embarrass myself. I’m just very happy to be here. I like a good race, and you know, that’s all I’m going to say.”

Her publicists cancelled all scheduled interviews after her media call, citing “a personal complication that came up this afternoon and unfortunately needs attention”. Schwarzenegger knew how to charm the crowds.

Arriving with girlfriend Heather Milligan, the former governor of California briefly posed for pictures before also being escorted to the grid prior to the race. In town for his Arnold Classic sporting festival, when asked if he was enjoying being here, he replied with a grin: “Of course, I’ll be back.” The local said she was a big fan of the event.

“It’s a spectacle and a different crowd. A different environment and a lot of different types of people. My boys love it. My girls came last year.”

Griffiths said she hoped the television drama about Julia Gillard would go ahead this year.

“Julia will happen this year hopefully. And a (different) movie at end of the year,” she said. Sam Newman made a glamorous entrance at the Paddock Club.

He arrived at the same time as Real Housewives of Melbourne stars Lydia Schiavello and Pettifleur Berenger.

“I’m just here by myself enjoying the day,” said The Footy Show larrikin.

Schiavello was a big fan of the race.

“I absolutely love it. You know me – fast men, fast planes and fast cars,” she said.

Model and DJ Didier Cohen just returned from LA to be trackside. The Australia’s Next Top Model judge was joined by Shaynna Blaze and Matt Shirvington as guests of Foxtel.

Gold FM’s Lehmo has just returned from Afghanistan, where he was entertaining the troops alongside his radio rival but good friend, Triple M’s Mick Molloy. British driver Lewis Hamilton confirmed he was single on the weekend during a chat at the Mercedes-Benz star lounge.

And Albert Park missed her – there seem to be a lack of high profile glamour WAGS on track.

How To Love Yourself, Food And Life Again with Gillian Young....