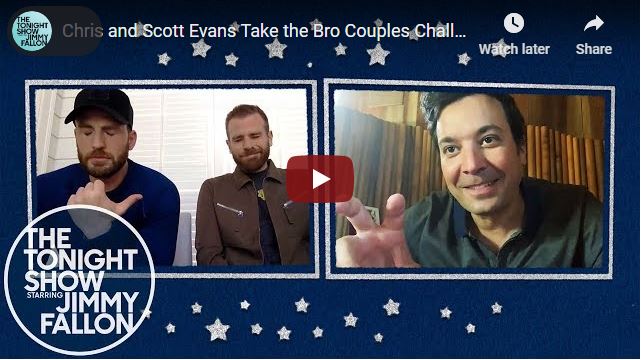 Chris Evans and his brother Scott take turns putting on noise-cancelling headphones while Jimmy asks them questions about each other and challenges them to match each other’s answers.

Host Jimmy Fallon once again put them up to a game called “Know Your Bro,” in which he’d name an activity and — without looking — the siblings had to point to whoever was more likely to do said activity.

Quarantining together, The Evans brothers, who are proved they know each other well by getting five out of five right in the first round. They both said the Avengers star was more likely to have “Neil Diamond vibes” and get into a political fight on Twitter, while Scott was agreed to be better at Wiffle ball, more likely to spend time on Instagram, and more fun at a sleepover.

Towards the end of the game, when Fallon quizzed the brothers on their showering habits, things got even funnier. They both immediately pointed to Scott for going the longest without showering during quarantine, while they laughed and pointed at each other for being the most likely to go without showering before quarantine. You don’t even want to know their answer for “Who smells worse right now?”

The brothers were hilarious when they were on The Tonight Show six months ago, playing the same game. Except that time, they got to wear noise-canceling headphones while answering questions. During one of the more memorable moments, Chris was asked to name Scott’s most embarrassing childhood memory.

Chris outed his brother for pooping his pants three times while on a ski trip with their family when Scott was 5 or 6 years old. That was amusing enough, but the situation got even funnier when Scott said he was actually thinking of another mortifying moment when he went to the bathroom in his pants because their sister wouldn’t pull over the car.

Watch the video above to find out how they did in the last round.