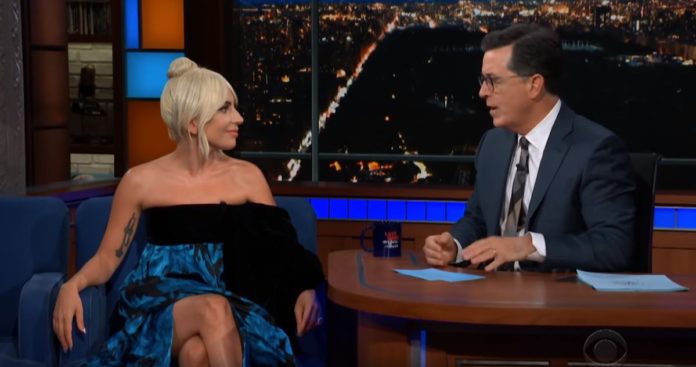 Lady Gaga said the trust she felt with her A Star is Born co-star Bradley Cooper was so strong that it didn’t even feel like acting.

Lady Gaga was a guest on “The Late Show with Stephen Colbert.” During the interview, Gaga said the TRUST she felt with her ‘A Star Is Born’ co-star Bradley Cooper was so strong that it didn’t even feel like acting.

A Star Is Born is a 2018 American musical romantic drama film produced and directed by Bradley Cooper, in his directorial debut. Cooper wrote the screenplay with Eric Roth and Will Fetters. A remake of the 1937 film of the same name, it stars Cooper, Lady Gaga, Andrew Dice Clay, Dave Chappelle, and Sam Elliott, and follows a hard-drinking musician (Cooper) who discovers and falls in love with a young singer (Gaga). It marks the third remake of the original 1937 film (which featured Janet Gaynor and Fredric March), which was adapted into a 1954 musical (starring Judy Garland and James Mason) and then remade as a 1976 rock musical (with Barbra Streisand and Kris Kristofferson).

Jackson Maine (Bradley Cooper) performs at sold out concerts while exhibiting a drinking problem which he hides from the public (“Black Eyes”). His main support and manager is his significantly older brother Bobby (Sam Elliott) who looks after him. Ally (Lady Gaga) is a young singer-songwriter in her own right who works as a waitress with her friend Ramon, while also moonlighting as a singer at a drag bar. After a show, Jackson arrives at the bar so that he can drink and witnesses Ally’s singing firsthand (“La Vie en rose“). Amazed by her talent, they have a drink together and Ally reveals that she has never pursued a professional career due to being told that she has a big nose, something Jackson admits that he finds attractive and they share songs together.

He drops her off at her home where she lives with her widower father Lorenzo who runs a driving service with his friends. Jackson asks Ally to come to his show tonight, but she refuses even when Lorenzo insists that she go. She eventually changes her mind and takes Ramon with her where Jackson asks Ally to sing on stage with him. After some hesitation, she relents and is praised on social media (“Shallow“).

Jackson has Ally perform at several concerts with him and they slowly begin to form a relationship (“Maybe It’s Time”). After Jackson passes out drunk, Bobby tells Ally that she needs to be careful around him. Jackson takes Ally to see a farm that he bought for Bobby and where their father is buried, but discovers that Bobby sold the land and that their father’s body was washed away in a storm. Angered at his betrayal, Jackson punches Bobby who quits being his manager soon afterwards.

After one show (“Always Remember Us This Way”), Ally meets Rez, a record producer who offers her a contract. While visibly bothered by it, Jackson supports her decision anyway. Jackson helps Ally get through the trials of her new position and she buys a house for the two to stay in. While performing at one of her concerts, Rez berates her for canceling her dancers and suggests that she dye her hair which she dislikes (“Heal Me”). Jackson, who was supposed to see her perform, passes out drunk in the middle of town and is helped up by his childhood friend Noodles who allows him to temporarily stay at his home. Ally arrives and the two make up. Afterwards, Jackson proposes to Ally with a small guitar string loop and they get married immediately that day.

While Ally is performing on Saturday Night Live (“Why Did You Do That?”), Bobby arrives and reconciles with Jackson. Later, Jackson voices his disapproval of Ally’s new provocative song which she was nominated for. When he calls her ugly, they have a falling out though they soon try to put the issue behind them. Jackson performs at the Grammy Awards for a Roy Orbison tribute and it becomes apparent that he is intoxicated. Ally wins a Grammy for Best New Artist, and when she goes up on stage to receive her reward, Jackson is brought on stage as well, but he passes out, humiliating himself. Lorenzo takes Jackson backstage and berates him and puts him in the shower to sober up. Jackson then joins a rehabilitation program.

Ally visits Jackson in rehab, and he tearfully apologizes for his behavior and returns home sober. Rez visits and privately tells Jackson that he will eventually ruin Ally’s life due to his history even if Ally remains the more stable one. She explains to Jackson that she is going to cancel her concert tour early so that they can have the summer all to themselves. As she leaves, Jackson states that he will come to her last concert. As she is performing, Jackson is about to leave, but instead he begins taking pills. He goes into the garage with his belt off and hangs himself.

Ally becomes almost inconsolable despite Lorenzo and Ramon’s attempts to help her. Eventually, Bobby explains that Jackson’s death was his own fault and not hers. Ally takes a song that Jackson had written but never performed and decides to sing it at his funeral, where she identifies herself as Ally Maine (“I’ll Never Love Again”).