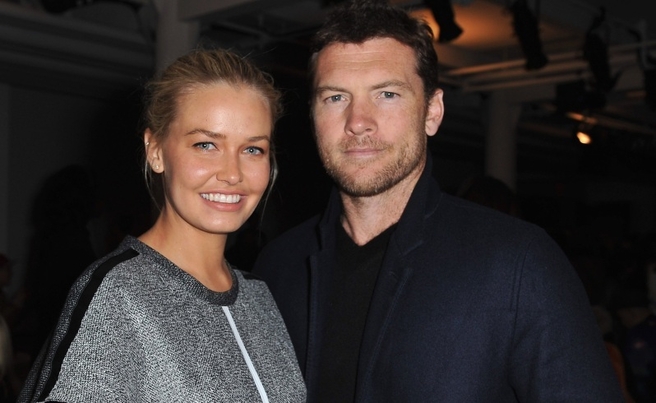 She gave birth to her little bundle of joy Rocket Zot just days ago.

And now Lara Bingle has been spotted out in public for the first time since she and husband Sam Worthington welcomed their special little guy into the world.

On Tuesday, the 27-year-old emerged from the Malibu home she shares with her actor beau to go for a drive with her mother Sharon.

The Australian celebrity couple have been supported by Lara’s mother, who flew to the US from Sydney during late stages of their first pregnancy.

Looking comfortable behind the wheel of her black Mercedes SUV, the new mother was glowing.

Wearing a pair of rounded black shades with gold detailing, the model-turned-businesswoman flocked her famous cropped ‘do to one side.

Clutching the wheel with her left hand, Lara’s ring, thought to be her wedding ring, was noticeable.

Lara’s outing with her mother comes after Sam has been spotted running errands in the days following Rocket’s birth.

Family is incredibly important to Lara, who affectionately named her son after her late father Graham, who passed away from liver and pancreatic cancer in 2008.

On Saturday, she took to social media to explain that Rocket’s unusual second name was ‘a respectful nod to my late father, whose nickname was affectionately, Zot.’

Lara broke her silence after an Australian publication was critical of her bub’s unique moniker, and poked fun at his middle name in particular. Monday’s turn behind the wheel in Los Angeles comes after the beauty entrepreneur has previously had a driving record littered with mishaps back in Sydney.

In May 2014, Lara was handed a six month suspended jail sentence after a series of driving offences in Australia.

She was also slapped with a $2000 fine and ordered off Australian roads for two years, leaving her free to drive in the US.

The model was sentenced on two counts of driving on a cancelled licence, relating to incidents on 25 October and 1 November, 2013.